Estimating Information Production and the Size of the Public Domain

Here we’re going to look at using library catalogue data as a source for estimating information production (over time) and the size of the public domain.

Cultural institutions, primarily libraries, have long compiled records of the material they hold in the form of catalogues. Furthermore, most countries have had one or more libraries (usually the national library) whose task included an archival component and, hence, whose collections should be relatively comprehensive, at least as regards published material.

Furthermore, library catalogue entries record (almost) the right sort of information for computing public domain status, in particular a given record usually has a) a publication date b) unambiguously identified author(s) with birth date(s) (though unfortunately not death date). Thus, we can also use this catalogue data to estimate the size of the public domain – size being equated here to the total number of items currently in the public domain.

To illustrate, here are some results based on the catalogue of Cambridge University Library which is one of the UK’s “copyright libraries” (i.e. they have a right to obtain, though not an obligation to hold, one copy of every book published in the UK). This first plot shows the numbers of publications per year (as determined by their publication date) up until 1960 (when the dataset ends) based on the publication date recorded in the catalogue.

A major concern when basing an analysis on these kinds of trends is is that fluctuations over time derive not from changes in underlying production and publication rates but changes in acquisition policies of the library concerned. To check for this, we present a second plot which shows the same information but derived from the British Library’s catalogue. Reassuringly, though there are differences, the basic patterns look remarkably similar. 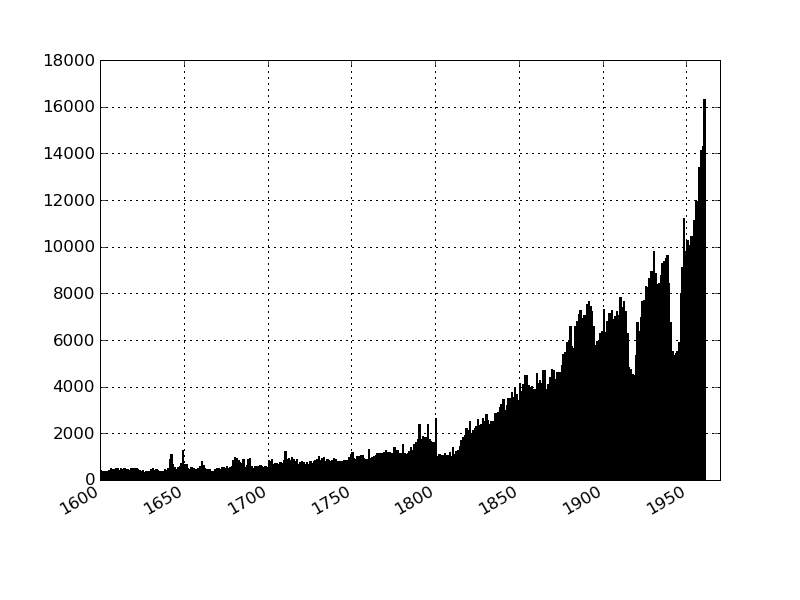 Number of items (books etc) Per Year in the Cambridge University Library Catalogue (1600-1960). 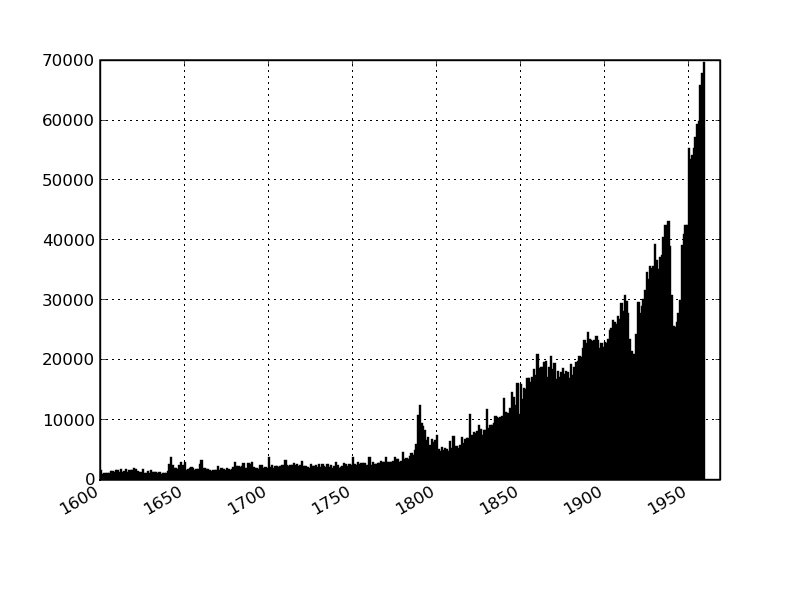 What do we learn from these graphs?

To do next (but in separate entries – this post is already rather long!):

Colophon: Background to this Research

I’m working on a EU funded project on the Public Domain in Europe, with particular focus on the size and value of the public domain. This involves getting large datasets about cultural material and trying to answer questions like: How many of these items are in the public domain? What’s the difference in price and availability of public domain versus non public domain items?

I’ve also been involved for several years in Public Domain Works, a project to create a database of works which were in the public domain.

All the code used in parsing, loading and analysis is open and available from the Public Domain Works mercurial repository. Unfortunately, the library catalogue data is not: library catalogue data, at least in the UK, appears to be largely proprietary and the raw data kindly made available to us for the purposes of this research by the British Library and Cambridge University Library was provided only on a strictly confidential basis.